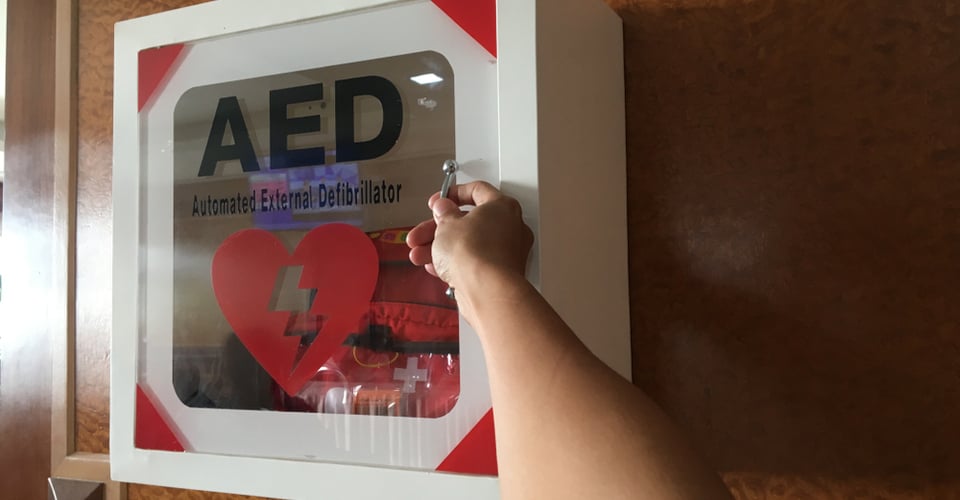 In honor of Sudden Cardiac Arrest Awareness Month, I thought it would be helpful to talk about how usability is a fundamental part of AED design, and the influence it can have on building user confidence and reducing the hesitation to actually get involved in a sudden cardiac arrest emergency.

First, a quick SCA recap: Sudden cardiac arrest is typically the result of fast and/or chaotic electrical activity of the heart, which stops the forward movement of oxygen carrying blood in the body. Without oxygen, body cells, especially in the brain, will quickly die and cause irreversible death.

CPR can artificially produce a limited amount of oxygenated blood flow but it can only prolong brain cell survival for just a few minutes. Why is that important? Because it buys more time for defibrillation.

An automated external defibrillator, or AED, is a defibrillating device designed to be used by someone with little or no training. A 2018 U.S. National Institutes of Health study found that an SCA victim is more likely to survive if a bystander uses an AED instead of waiting for EMS to do it.

Somewhere along the line, I remember seeing a statistic related to AED awareness that a high percentage of the adult population in the U.S. now recognizes what an AED is and has a basic understanding of its purpose. Sounds promising, doesn’t it?

Unfortunately, it appears what people DON’T know about AEDs is far more influential on whether or not one actually gets used in an emergency. A survey done earlier this year showed that more than 3 in 5 Americans doubted their ability to correctly use an AED in an emergency.

This is in direct contradiction of the intended use of AEDs, which are envisioned to be foolproof by design, even when used by untrained individuals.

Essentially, trained or not, you will probably operate an AED correctly. They are that easy to use.

In an upcoming newsletter article, I’ll be focusing on the issue of user willingness and the common reasons why people hesitate using an AED. (You can subscribe to the ASHI and MEDIC First Aid newsletter here.) Today I would like to try looking at this issue from the perspective of how AED design and function can help clarify why using an AED is so simple and without complication.

To help, let’s go over the descriptive name. AED stands for automated external defibrillator. Automated means it guides the user through its operation. External describes the connection to skin on the outside of the chest, and defibrillator describes its intended use, delivering an electrical shock through the heart to organize unstable and life-threatening electrical activity.

I think another important point to make with AEDs is that a user simply cannot deliver an accidental shock to someone who does not require one. The device just won’t allow it, no matter how much you push that button. You can’t hurt anyone using an AED, you can only help… unless you swing and hit someone with one I suppose…

Turning on the Power

Sometimes, the best place to begin is at the very beginning, and that’s turning on the power for the AED. As a notable AED pioneer told me multiple times, “If we can just get them to turn an AED on, we have done our jobs.”

Turning on an AED is the fundamental first step in operating an AED. I know that seems a bit obvious, but stay with me here. Powering up an AED starts up the automated voice instructions or prompting, and that’s the very heart of easy AED usability.

These devices literally talk to you and tell you what to do. Throughout the whole process. Just listen and follow directions…. but don’t turn it off!

Besides voice instructions, AEDs use other sounds to help users. One unique sound indicates a shock is indicated and that the AED is “charging” up to deliver a shock. This is followed by another sound indicating the AED is ready to deliver a shock. These sounds coincide with specific voice instructions such as “shock indicated” and “press the shock button.”

Visual prompting involves flashing colored lights which indicate things such as the power being on, an analysis being done, or which button to push to deliver the shock. All of this combined means the AED is coaching the user through every step of the process.

My old friend and noted AED pioneer also impressed upon people the importance of placing the defibrillation pads. In his words, “AED placement is the one thing that is completely up to the user.”

For educators, this is a key thing to remember about training. AED pad placement in a simulated hands-on skills setting should be a focused part of your AED class.

The first obstacle to be addressed is that pads need to be adhered to a bare chest. Usability studies from the AED manufacturers indicated two prominent issues in this regard. First, a number of users did not remove the clothes covering the chest and simply adhered the pads to the clothing. Second, a number of users did not peel the pads from the protective backings provided in packaging.

Some extra reminding of these potential issues may go a long way during training.

Accurate pad placement on the chest is also a factor in survivability. Correct pad placement allows for the most effective delivery of energy through the heart.

Finally, most AED pads today are pre-connected to the AED by leads, or wires.

It is possible for the pads connection to the AED to come loose, or not be pre-connected at all. As a troubleshooting solution, remind students that they may have to plug a pads connector into a slot on the AED.

Once the pads are in place, AED analysis begins automatically. This analysis is an important part of user confidence. The AED will look at the heart’s electrical activity and decide whether or not a shock is indicated. Users don’t have to.

The first AEDs came out in the late 1970s, and for the past 50 years, the reliability of their ability to analyze has been remarkably accurate. The decision to shock by an AED is extremely trustworthy, and knowing that could help make a bystander less likely to hesitate. It doesn’t hurt to emphasize this during training.

Here is a bonus trivia point for you: Shockable electrical activity essentially looks the same backwards, forwards, and upside down. If a user accidentally switched the pad placement on a chest, the AED will still accurately analyze the heart and make a correct defibrillation decision.

This is the point in the process where a user is most likely to bail, and it’s also when user confidence needs to be at its highest point. First experience, hurting the person, making things worse, getting shocked yourself… lots of thoughts are going through a user’s mind here. Throw in an agonal gasp from the patient and the whole thing goes out the window.

If an AED indicates a shock is necessary, deliver the shock. Period.

Another important issue in user confidence is the fear of the accidental shock to a rescuer. It hasn’t helped that a lot of gruesome “war” stories of dangerous accidental shocks circulate widely amongst defibrillation doomsayers.

With today’s pad design, almost all of the energy is delivered directly through the body between pads. Some energy may travel across the skin surface, but, at most, would be felt as an annoying tingle, or maybe not at all. The most likely place for it to happen would be on or near the pad.

High-performance CPR techniques by EMS providers today often include the hovering of compression hands very near the chest surface when defibrillating, or in some cases, directly on the chest itself. The fear of accidental shock is not considered a significant issue.

Still, annoying tingles can be avoided by simply making sure no one, including the person using the AED, is in contact with the body of the person being defibrillated. Users should clearly look to verify there is no contact and verbally warn others to not touch the person when delivering a shock. As a reminder, the user-friendly AED will be giving voice instructions to do exactly this.

The energy from a defibrillation shock is gone within milliseconds of delivery. There’s no chance for an accidental residual shock. Resumption of CPR compressions can be started immediately after delivering a shock, even if the voice instruction to do has not occurred yet. This works regardless of whether the defibrillation shock is successful or not.

As always, the trusted AED voice instructions provide us basic CPR techniques to follow. In addition, the AED will keep track of time and tell you when another analysis will occur (usually every two minutes).

As reliable as AEDs are, there are some maintenance issues that affect usability. The first is the self-testing AEDs do to ensure the electronics are working properly. Self-tests are automatic, but can also be forced when desired. From a user standpoint, audio and visual warnings provide a quick indication of a problem found during a self-test. If noticed, a user should turn the AED on to see if there is a specific voice instruction on how to address the problem.

Most problems with AEDs involve the consumable nature of the AED pads and batteries. Although they have a long shelf life, typically measured in years, they still deteriorate over time and become unusable. From a user standpoint, the ability to use spare pads and batteries and how to install them are useful things to cover in training.

So, let’s see where we are in connecting common AED features to confidently using one…

AEDs are designed for easy use by those with little or no training. They are safe to use. They are reliable.

Let’s see what we can do to get that information to users to change the minds of the 63% of Americans who today are not confident enough to use an AED in an emergency.