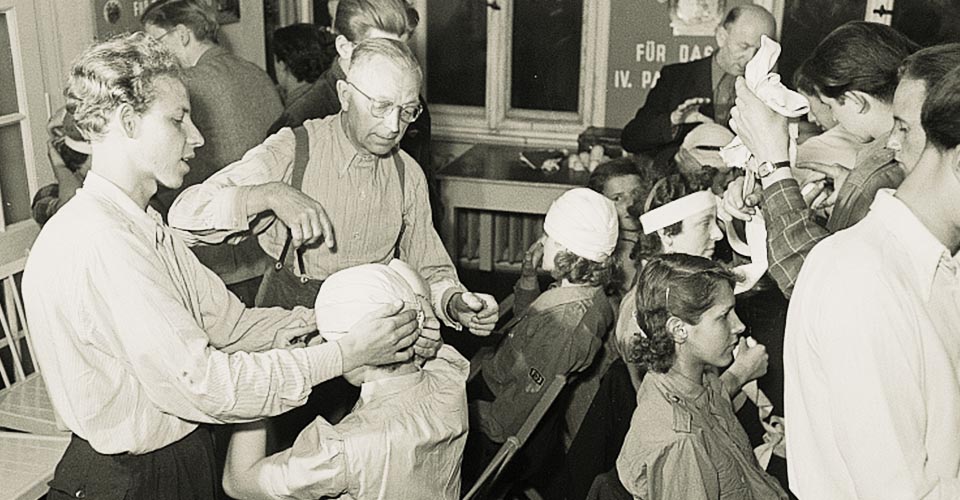 To be sure, providing initial supportive care for serious medical problems until someone with more knowledge and experience can arrive has been around for a long, long time. Since then, the biggest changes have been a dramatic shortening of the time it takes for more experienced help to arrive, and a significant narrowing of the depth of treatment an initial provider has had to perform.

Much of that change occurred in the late 1800’s, and mostly in Europe where the battlefield nature of first aid was making a move into a more industrial world and the dangers that accompanied it. In 1877, the newly formed St. John Ambulance Association (SJAA) in England forever altered the way we think about first aid… they developed a layperson first aid curriculum and started training lay first aid providers.

Certainly there were challenges, but the concept took hold and quickly spread throughout much of the rest of Europe.

In the United States, first aid was still firmly in the grip of the military. The American Red Cross, created as a support organization for the military, had no interest at that time in pursuing services outside of that role.

The birth of layperson first aid training in the U.S. is actually attributed to the State Charities Aid Association of New York in 1883. Impressed by what St. Johns was accomplishing in England, the association created “The Society for Instruction in First Aid to the Injured.” Dr. Bowditch Morton authored the very first student manual entitled Handbook of First Aid to the Injured.

The local New York society pioneered the use of “plain” language to train a variety of lay first aid providers. By 1898 the society had certified over 7000 providers.

By this time the Red Cross had begun to struggle organizationally and financially, primarily due to a dependence on the military during an extended time of peace. Clara Barton, the founder of the Red Cross, started to actively discuss non-military first aid training as a possible solution to the financial woes of the organization. Unfortunately, she faced deep resistance and ultimately decided to leave the Red Cross in 1904.

Meanwhile, significant changes had been occurring at the American Red Cross which now had a more significant relationship with military and federal government. Led by Mabel Boardman, a staunch advocate of the organization, expanded first aid training became a significant objective, initially through the creation of “relief columns”, groups of trained first aid providers that could be called on to support the military during times of war.

By 1909, through the work of Major Charles Lynch, a U.S. Army surgeon, and a relationship with the Y.M.C.A., the American Red Cross ultimately became the third organization to provide widespread layperson first aid instruction in the United States.

The Red Cross rapidly became the primary fixture in the U.S. related to layperson first aid training. The National First Aid Association of America had faded significantly and finally ended with Clara Barton’s death in 1912.

These early pioneers in first aid training paved the way for others to follow including MEDIC First Aid and the American Safety & Health Institute, two flagship brands from the Health & Safety Institute. The early days of these two brands are as equally interesting and most likely the topic of a future post.

Ref: Bandage Battles: The American Red Cross and the Politics of Emergency Response on the Eve of World War I ; John F. Hutchinson; Simon Fraser University; 2002;